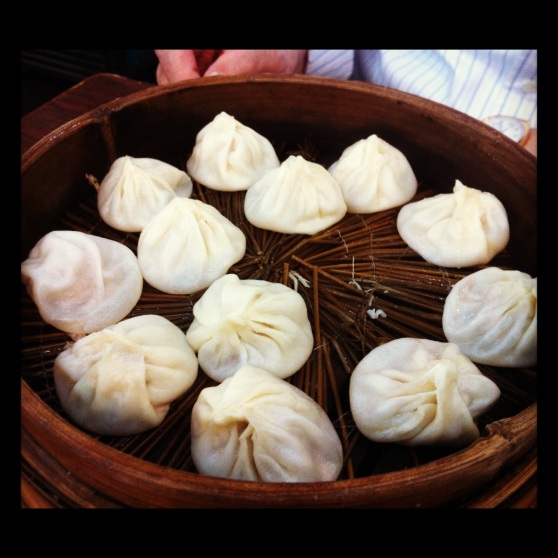 I love 小笼包/xiao long bao/Shanghai soup dumplings. Those succulent morsels definitely count as one of my favorite foods in the entire world. When I was really young, my parents used to drive me over an hour to a hole in the wall restaurant where we would eat them. I still have no idea where we were…San Francisco? San Jose? I used to brag that I could eat an entire steamer by myself (that’s impressive when you’re 10).

There’s a true art to the perfect xiao long bao. The skin needs to be paper thin and almost translucent because there is so much soup inside (warning: the soup burns like the heat of a thousand suns). You should be able to use your chopsticks to pick up your dumpling by the top of its “nub” without it breaking. Finally, the ground pork inside must be flavorful and tender (plus there needs to be a good meat to dumpling skin ratio).

It’s difficult to find even good xiao long bao. Since I was in Shanghai, I decided to try and find the perfect Shanghai soup dumpling. I already knew that the dumplings in the Yu Yuan Gardens (城隍庙) weren’t good anymore. It used to be famous for its xiao long bao, but now it’s become so incredibly touristy and the quality has gone downhill. The dumpling skin is way too thick. You have been warned… don’t go to the Yu Yuan Gardens in Shanghai for 小笼包. 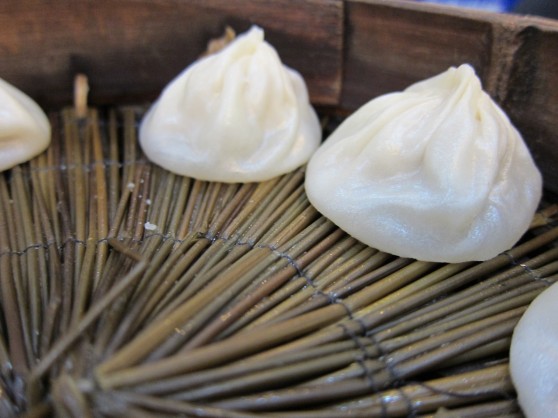 Look at That Translucent Goodness

A local, Shanghainese woman recommended Lin Long Fang on 10 Jian Guo Dong Lu (建国东路10号). For 10 RMB, you can order a whole steamer of 12 dumplings. That’s roughly less than $2 for 12 dumplings. If you go, make sure someone speaks Chinese. As you can see from the picture, the menu hangs on the wall and is completely written in Chinese. You won’t find anyone who speaks English here. The seating is also communal and a little bit like survival of the fittest. You need to be willing to fight for a table, but also be willing to share a table with strangers.

Our Order. There’s a Charge for Ginger.

The steamed dumplings were quite good. The skin was thin and there was a ton of soup. The pork had a real “meaty” taste (although I question where this meat came from) and I loved the slightly sweet, fermented ginger (it costs an extra 1 RMB). My only problem with Lin Long Fang’s 小笼包 was that the top/”nub” of the dumpling was WAY too thick. It was too doughy and not like the paper thin consistency of the rest of the dumpling. 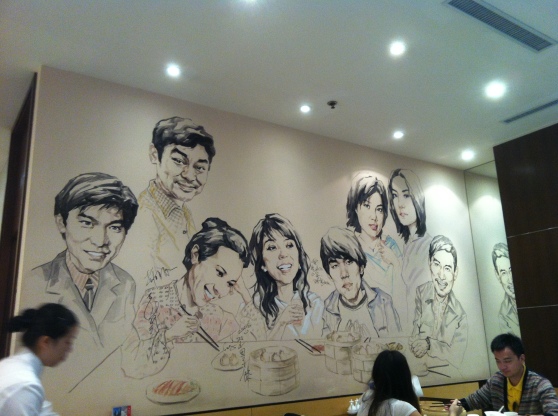 Yes, I know that Din Tai Fung (鼎泰丰) is a chain from Taiwan, but there is no Din Tai Fung in the Bay Area. The closest is Arcadia in Southern California. The entire four years that I lived in Los Angeles, I only went to Din Tai Fung once (I’m sorry. Arcadia is far). There are multiple Din Tai Fung branches in Shanghai, but I always frequent the one in Xin Tian Di (新天地) whenever I go to Shanghai.

In terms of a restaurant going experience, Din Tai Fung is a complete 180 from Lin Long Fang. This is a restaurant catered for Westerners. The menu is in English, service is impeccable (especially for Chinese standards) and it is extremely clean. In Lin Long Fang’s defense, it was actually pretty clean in there too, but there’s still the communal table aspect. At Din Tai Fung, you also pay more than six times the amount for 小笼包. I think it’s 58 RMB for a steamer of 10 dumplings. That’s about $10 for 10 dumplings, so you’re practically paying American prices for food.

Din Tai Fung’s dumpling are true gems. Their dumplings also have lots of soup and the skin of the dumplings are so thin. They pass the chopstick test– I can pick them up at the top without having them break. I like how they also taste really light and clean. It doesn’t feel like a heavy meal. I think the biggest difference is the meat. The ground pork isn’t as flavorful compared to Lin Long Fang and I feel like the meat to dumpling skin ratio is actually a little bit on the small side.

Final Verdict: Maybe, it’s because I am American, but I like Din Tai Fung’s 小笼包 better. I’ll be real. Din Tai Fung’s palette is catered more toward Westerners and price aside, I bet most Chinese people would prefer Lin Long Fang. Lin Long Fang’s dumplings were good and it’s a more authentic experience. I’d go back again, but I wouldn’t go out of my way to eat at Lin Long Fang. I don’t think my quest for the perfect Shanghai soup dumpling is over yet. More in-depth research may be needed…