This weekend was absolutely gorgeous in Paris and will probably be the most beautiful weekend we have all year with temperatures reaching the high 80s. It probably sounds silly that I wanted to eat Asian food in Paris, but this city has some amazing Japanese food that is just waiting to be tasted by yours truly.

In the 1st/2nd arrondissement, there is a street that is full of small Japanese restaurants called Rue Sainte-Anne. My Japanese classmate had heard good things about Kunitoraya (you should click on this link because they have a cool website) and my friends and I made a plan to grab lunch there on Saturday. We were having too much fun shopping and got to Kunitoraya at around 3pm. We had JUST missed the cut-off point. Our hopes and dreams were dashed until one of the waiters kindly told us that there was another udon shop around the corner, Sanukiya. 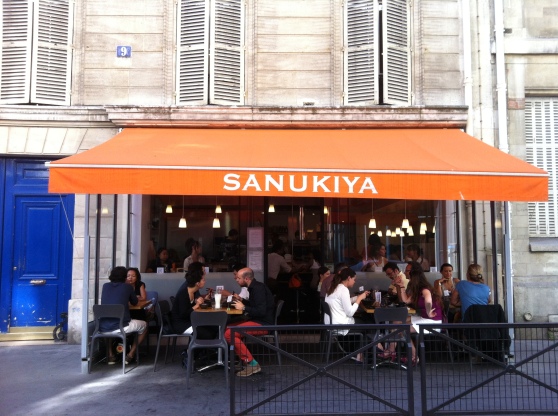 Apparently, the owner of Sanukiya used to work at Kunitoraya and recently opened up his restaurant earlier this year. I thought it was really cool how the two restaurants seem to have maintained a good relationship (good enough to suggest we go to Sanukiya). The restaurant consists of bar seating inside and a few outdoor tables. As you can see from my picture, the place still had amazing business at 3 in the afternoon!

Since it was a million degrees outside, I ordered a cold udon noodle dish that came with tempura fried vegetables and shrimp and served with a soy/dashi broth sauce. These were the best udon noodles I’ve ever eaten. Up until this point, I always thought good udon noodles should almost have a gummy-like texture, but I was so wrong. These noodles had actual texture and my Japanese friend confirmed that these noodles were legit. She said even this kind of quality would be hard to find in Japan. She talked to the staff and we learned that the noodles are all made in-house (though the flour is imported from Japan). While the tempura didn’t blow me out of the water, I didn’t care. I just wanted more noodles.

I was so excited we found this gem and I can’t wait to also try Kunitoraya and compare the two. After lunch, we spent the day wandering the city and just enjoying the beautiful weather. The Tuileries Garden was filled with people sun bathing and enjoying a picnic. My favorite was watching the kids push boats around with sticks. 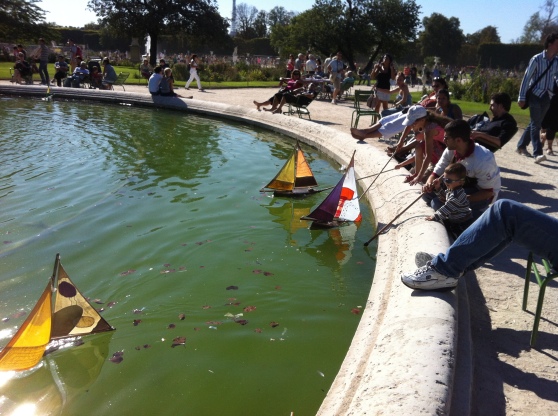 Boat Racing in the Tuileries Garden

When we crossed the Seine River, we noticed all the locks on the bridge. People were buying locks to represent their love and throwing the keys in the river. It’s hard not to get swept away by all the romance in this city.

It was a fabulous weekend and a great to start to an already busy school year. I’m excited to explore the city (and eat more udon noodles). 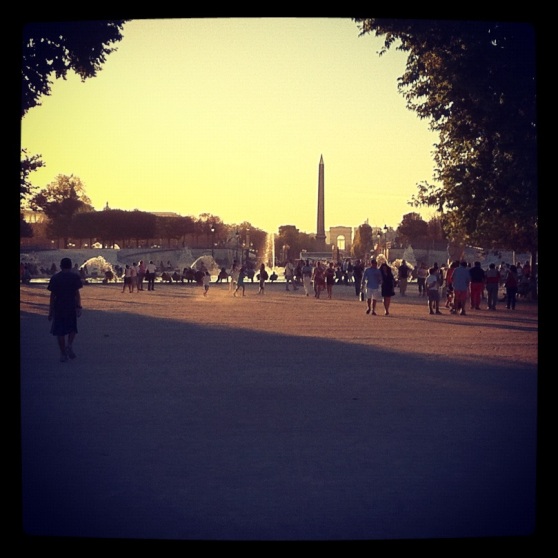 One thought on “The Hunt for the Perfect Udon in Paris”